Claire is passionate film and the filmmaking process. Along with her brother, director Anthony Bueno they embarked on a 12 year journey into making their debut feature documentary CLEANIN’ UP THE TOWN: Remembering Ghostbusters, the definitive retrospective making of the ’84 film Ghostbusters. The award nominated documentary has garnered much success worldwide.

Their sequel documentary TOO HOT TO HANDLE: Remembering Ghostbusters II is nearing completion and she is currently in pre-production for horror film The Tunnel.

CLEANIN’ UP THE TOWN: Remembering Ghostbusters

Claire is the producer of CLEANIN’ UP THE TOWN: Remembering Ghostbusters the most complete account of how the classic film Ghostbusters was made.

Made with her brother director Anthony Bueno, together they have travelled all over the United States from Lily Dale to Jacksonville cross country to San Diego, LA and San Francisco, gathering interviews with over 40 members of the cast and crew. Responsible for bringing these stories to life include actors Dan Aykroyd, Harold Ramis, Ernie Hudson and Sigourney Weaver, director Ivan Reitman, producers Joe Medjuck and Michael C. Gross, Visual effects crew include Richard Edlund, John Bruno and editor Sheldon Kahn.

Made in 1984 in the pre digital age when special effects were still evolving. Ghostbusters was an instant hit followed up five years later with Ghostbusters 2. Now with a string of spin offs from cartoons, video games to the new Ghostbusters directed by Jason Reitman and due for release in 2021,  CLEANIN’ UP THE TOWN: Remembering Ghostbusters celebrates why the love of Ghostbusters  has lasted over 35 years and sparked the imagination of so many.

Available on Blu-ray and VOD. 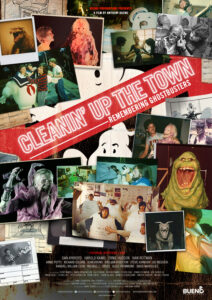 Filming has completed round the United States, interviewing many of the cast and crew including  actors Dan Aykroyd, Harold Ramis, Ernie Hudson and Sigourney Weaver,  director Ivan Reitman, producers Joe Medjuck and Michael C. Gross,  visual effects crew including ILM’s Dennis Muren and Ned Gorman, to give the most complete account of how this classic film came to be.

Currently in post production, and intend to announce a release date very soon.

The sequel to Ghostbusters made in 1989 when photochemical  visual effects had reached their peak Ghostbusters II was one of the last films to be made using this traditional method.

The documentary is now over 10 years in the making with currently 30+ people interviewed. So all that’s left to say is ‘coming soon…’ 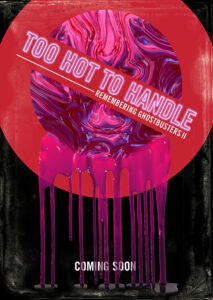 Spanning decades, Mahoun a small town in the Scottish Borders has experienced a series of young women vanishing, Helen appears to be the latest.

Having endured much pain Beth and her partner Daniel have relocated to Scotland, optimistic the move will be the birth of a new era in their relationship.

Nestled deeply within the Tweed Valley lies an abandoned Tunnel. Upon entry the tunnel engulfs any brave visitor into an abyss of foreboding blackness.

Does this tunnel hold the secret to the missing persons and what in Beth’s past connects her to it? 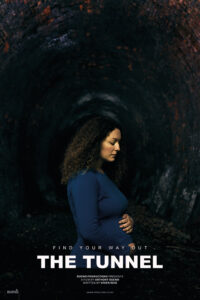